I’m gonna catch up one day, I …no, I won’t swear cuz being honest, I will perpetually be playing catch-up with this blog.  ^^;

Two weekends ago was a 3-day weekend thanks the national holiday 体育の日 (taiiku no hi), Health and Sports Day. Wikipedia tells me it commemorates the opening of the 1964 Tokyo Olympics.

Anyway, a friend told me about a Yoshitaka Amano (the illustrator for all Final Fantasy titles, and the character designer for many of the early FF’s) exhibit in Hakata.  I dug around the internet and found the event sponsor’s site.  Turned out you could get free Amano goods just for RSVPing on their site! Even better still, Amano himself would be there! So off we set to the Fukuoka Koutsuu Building!

Cassie & I in front of the exhibition hall

While I hadn’t been the biggest fan of Amano’s style, I must say I got a new appreciation for his works after seeing them in person rather than in game illustrations and such.  I guess it’s because at a small size, the etherealness of his works (which is one of the things I don’t like, the other being his fabric fetish) is exaggerated.  Another thing I liked was that there were pieces that had these grotesque looking fairies.  I’d never seen something like that in Amano’s work, so it was a pleasant surprise.

Some people got to meet Amano and get an autographed drawing.  I don’t know if they were people who bought a print, or if they paid expressly for the opportunity.  For those that did not have the chance to get his signature, there was a “janken taikai,” or “rock-paper-scissors tournament.”  I was wondering how that would go, given that there were maybe 100 people there.  Turned out, everyone played simultaneously against (Amano’s assistant?) Mariko Suzuki! Unfortunately, neither myself nor my friend won, but 7 or so of the people who won in janken got to meet Amano & get his signature.

While trying to get a good photo of Amano-sensei, I snuck a photo of Amano’s orginal Sephiroth illustration, since it luckily was next to the stage. ^o^

Yoshitaka Amano (the man in the center) 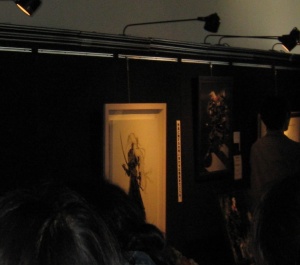 Supposedly, all JETs develop a “Japan hobby.” I decided that mine would be collecting pretty clear files (plastic things closed on two sides that serve as folders; they don’t really have 2-pocket folders here.  I haven’t seen any at least).  There were different clear files with Amano artwork, but one didn’t get to choose.  I got a black & white one, not sure what it’s supposed to be.  But the fact that it’s a promo item makes it cool.  And the fact that I was able to read the event sponsor’s site and know what to do! (Ironically, while my ability to read Japanese has gotten much better, it feels like my ability to speak is going down! I think it’s because the Japanese class I go to is in plain form, and I’m used to speaking in polite form, so now I’m all mixed up! >_<) 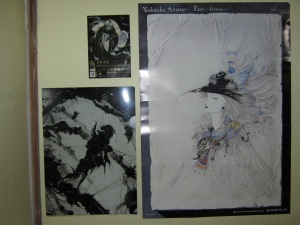 After the exhibit we went to eat お好み焼き (okonomiyaki), which is fried cabbage with mayonnaise and one’s choice of toppings, sometimes called “Japanese pizza.”  Since we were in Hakata, I took the opportunity to go back to Yodobashi Camera to get my 100,000 yen gift certificate for signing up for internet there.  I have until December 31st to decide what I want to use it on.  I’m thinking either iTunes cards or a good pair of speakers for my computer.  Although I’m also contemplating the Final Fantasy XIII PS 3 bundle. ^o^ Even though I barely have time to play quick games like Dissidia. Oh, how Square-Enix has entrenched itself in my soul! It’s as bad as Apple’s hold on me!

Anyway, at Yodobashi Camera’s instrument section, this young dude sat down at an electric piano and played “The Prelude”! Then he started playing other themes from Final Fantasy.  He had the same bag & poster from the Amano exhibit. The Geeks gather! Reunion!

Then, we went to Hakata Station’s info booth to find our way to Canal City Hakata. We picked up clear files with maps of the Hakata area. Very convenient and a great addition to my clear file collection!

Canal City Hakata is basically a mall with rad architecture.  I think there’s a hotel, too.  Every hour there are water displays along its canals.  There was also this robot randomly rolling around the hallways.  But before I propagate the “Japan is full of mechas” idea, some may be surprised to learn that things like each adult having their own laptop and home internet are NOT the norm in Japan, or at least, not here on Kyuushuu. (So what if they had a scale model Gundam in Tokyo?) I don’t know if this is because everyone has the internet on their phones, or if people don’t like computers, or they think it’s too expensive, or what.

Looking down to a stage area 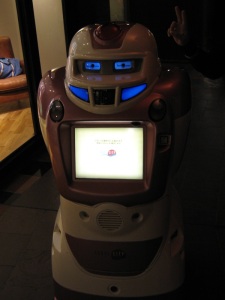 All your mall are belong to us!

There was a Timberland Store in Canal City, and I was much amused to see the red fleeces and coats that are the “civilian” versions (so to speak) of the City Year uniform.  After that, we went back to my apartment.  But not before I put us on a train going in the wrong direction. ^_^;;;;  Luckily, since I know the stop immediately after Hakata going away from my place is Yoshizuka, we didn’t waste too much time.  Still felt like an idiot though. Oy gevalt…