At some point in the year, usually in June or September, schools across Japan have a 文化祭 (bunkasai) meaning “Culture Festival.” I think it’s the same thing as what I’ve seen written in English as “school festival.”

The festival was spread over two days, Friday and Saturday.  (EDIT: Some schools’ bunkasai only last one day.) Thursday evening, these wonderful boards were put up over the school’s gate: 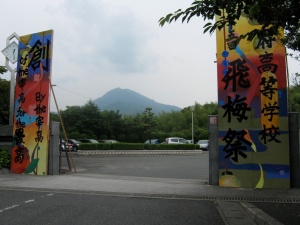 Theme: "Creation. By the School, of the School, for the Ultimate." Or something like that.

Friday’s events weren’t open to the public.  There were many performances in the auditorium, such as the first round of the class song battle, brass band concert, a presentation by the students from the nearby Prefectural School for the Blind, and of course, English play.  Unfortunately I didn’t get to see the class song battle.  The brass band concert was pretty good.  Two of the members did a comedy routine while the band set up on stage, but I didn’t get the jokes.  The band played about five or six pieces.  I didn’t recognize most of them, but when the comedians/MCs went back up to the front and said “We’re now going to play music from the movie in which Johnny Depp was so cool, Pirates of the Caribbean,” I said “YES!” out loud. ^_^;;;  It turned out to be “Drink Up Me Hearties Yo Ho,” from the third PotC movie At World’s End. Well, since it was an arrangement for brass & percussion it was pretty different…not the soaring emotion that a full orchestra can achieve, but still great.  (The school apparently doesn’t have a full orchestra, but this year’s brass band is much bigger than last year’s so maybe there’s hope!) Their last piece sounded great and the crowd was really into it, but I didn’t know what it was. My co-ALT told me it was the theme song to Neon Genesis Evangelion, “A Cruel Angel’s Thesis.” Of course I’ve heard of NGE, but I’ve never seen an single bit of it.  I know, some of you think I’ve just blasphemed.  >o<

Next up was the big daddy…English play.  So, how did my students’ performance of High School Musical 2 go after 3 months’ preparation? It’s superstitious of me, but since their final rehearsal was 100% mistake-free, and even had decent acting, I worried that they’d mess up the actual performance. What someone thinks of the performance depends largely on how much English they know or how much accented English they can understand, as well as how familiar they are with the HSM franchise.  HSM isn’t well known in Japan, and given that this is a low level school, it was highly unlikely that the audience would be able to understand the English, even though I simplified it as much as possible when I rewrote the script. Most of the students in the audience fell asleep after 15 minutes.  It didn’t help that it was fiendishly hot in the auditorium.  Heat + dark room + language you don’t understand = Sleep.  The saddest part, however, was that the male lead choked.  Near the beginning, when the two leads come on stage, they’re holding hands, so the audience giggled, squirmed excitedly, and went “OooOoOOOooh!” in a way that in the States would only be seen in the lower grades of middle school.  Poor boy couldn’t handle it.  Well, he wasn’t the only one.  The pressure got to all of the kids; not only did the actors mess up their lines, but some of the kids handling the lights also messed up.  The audience of course couldn’t tell if the lines were bad, at least.  From my point of view, I give the opening day performance a “C.”  If only someone had filmed Thursday’s last rehearsal, the students would have a record of themselves doing a really good job.

That was it for Friday’s events.  Saturday morning had several things going on at once, and it was all open to the public (which, far as I know, meant parents of students and former students).  I think it was during this time that the homerooms had set up their special rooms.  For example, one homeroom set up a café where all the “servers” were dressed in their middle school uniforms.  Well, so those kids told me; I had to be a judge at the English speech contest that was going on at the same time so I didn’t see it.

Said contest is actually for middle schoolers.  For that speech contest, we had two ALTs from other schools come and be guest judges.  (Virtual shout out to them yo!)  There were 19 contestants, each reading one of three short speeches that we’d selected a few months in advance.  They were pretty good.  The only problem is that many of these kids are coached to use ridiculously over the top gestures.  I’ve heard Japanese people comment that they don’t use gestures much when they speak, so maybe that’s why apparently they have this exaggerated idea of what gestures should be like.  If you watched some of the kids, you’d think you were watching someone telling a story to preschoolers rather than giving a speech.  The group I judged in the preliminary round wasn’t too bad on this point, but apparently the group my co-ALT judged had one “actress” who got down on her knees and acted out the crying of the little girl in the speech. ^_^;;;

Once that was done, we had lunch, then went to see English play.  Saturday’s performance had fewer readily obvious mistakes, but I can’t say it was better.  The kids didn’t feel pressure to go all out in front of the 100 or so parents that made up most of the audience that day.  Oh well. 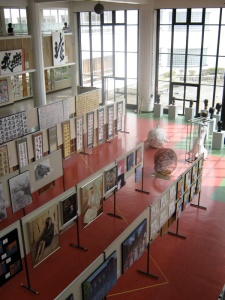 You can see works from various disciplines in this photo: sculpture, graphic design, painting (oil and Japanese painting), drawing, and shodou (Japanese calligraphy).

After that, I went home, took a nap, and got up to go to the inevitable enkai.  At these events, especially if I’m sitting around teachers outside of the English or Art departments, I’ll get asked the question “What is the most surprising thing about Japan?” or some variation thereof.  Honestly, there’s so little that’s actually been surprising to me, and of that most of it was only surprising at first, that I usually struggle to answer this question.  Luckily this time the question was different enough to be easy to answer. The conversation went something like this:

Teacher: You don’t do enkai like this in America, do you?

Me: Not really.  My mother’s a school teacher, and at least at her school they only have enkai when a teacher’s retiring.

Teacher: What’s the one thing you can’t get used to about enkai?

Me: Pouring drinks for other people.  Every time I finally notice that someone’s glass needs refilling, someone else gets to it first!

Anyway, that was easy to answer since it wasn’t really about being surprised.  It’s not surprising that you should be on the lookout to refill others’ drinks; when I first learned of this custom I really liked the consideration it shows.  I’m just not used to doing it, so I’ve yet to develop the Keep An Eye On Everyone’s Glass subroutine.

Thursday I happened to run into the principal as I was coming back from taking pictures of the gate, and he said to me, “Oh, this will be your first bunkasai.”  I just smiled and said yes, but I knew what that meant: the next time I see him, he’ll ask me what I was most surprised by.  While it’s true that there isn’t a complete equivalent of bunkasai in the States, I don’t think it’s all that different from the various events we do have in schools.  We have concerts and art exhibits in schools.  Well, at least we did until districts decided to lay off all their art teachers in the name of economizing to save the district while the big wigs shamelessly gave themselves raises and otherwise raided the district’s coffers. ARGH the hypocrisy hurts my brain! My middle school had an International Day; each homeroom would get turned into a particular country, then all the students were free to visit the other rooms, getting their “Passports” stamped and experiencing the culture of that country.  There’s all the dances as well, prom and such.  In other words, schools in both the States and Japan have fun events outside of the academic curriculum.  So what exactly should I be surprised by?  Maybe I should avoid the principal until several months have passed because nothing surprised me and he’ll be disappointed! ^o^