Happy Halloween! ^o^  First, enjoy a picture that is a digital reproduction of the doodles I draw on the chalkboard to explain how to go trick-or-treating:

When you go trick-or-treating, you become almost as large as the houses.

Anyway, now that Task Booklet 3 of the Japanese Linguistics and Pedagogy Course has been submitted and is presumably on its way to Tokyo with an October 30th postmark, I can post one of the poems I did for one of the tasks.  The task was to write some haiku or tanka.  For the free topic, I choose to write a tanka I call 「博多のハロウィン」 (“Hakata’s Halloween”), which was inspired by Halloween, the fact that there actually is a Halloween parade in Hakata, and the chapter on dialects. I’m not completely sure this is correct Japanese nor correct use of Hakata dialect. ^o^;

You have to buy candy

I didn’t go to the Halloween parade because the night of the 30th I went to a Halloween party, whose grand finale was a 2-hour karaoke session that started at 2AM! XD 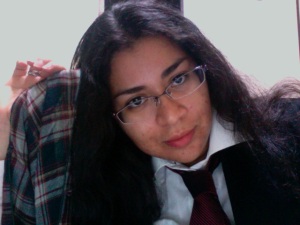 This isn’t for Halloween.  This is my 制服 (uniform) for GACKT’s mock school concert.

The online store I ordered from did not let me down. Well, I did measure myself about 10 billion times and check each garment’s size 10 trillion times before ordering.  My co-ALT lent me one of his ties.  Now I’m ready to go to Kobe in my fake uniform and be a “student” in GACKT’s school!

For the record, the uniform of the school I work at looks nothing like what I’m wearing.  That would make me feel kinda weird. Well, weirder than this whole thing already kinda does, but oh well. It’s a funny kind of weird. ^_^;

Contrary to this blog’s contents, September and October have been busy as hell between work, study, and everything else.  So what’s been going on?  Let’s get this blog up-to-date in the fastest way possible: a Random Life Stuff post in bulleted list format!

Oh wait there is one other thing!

Anyway, I’ve created a new page, ~Vignettes~. Like all the other Pages, you can access it from the tabs below the header image.  This page will showcase brief conversations/interactions with students.  Currently, most of the content had already been posted in previous blog entries, but there are a couple I hadn’t posted before.  Also, to take into account the possibility that I misunderstood what was said to me when kids spoke to me in Japanese, I wrote down what was said to me (as I remember it).  I hope this Page will help satisfy the curiosity of those burning with the question, “what are the students like?”  Or just give you a healthy dose of “kids say the darndest things.” ^o^

Okay, this post is a month late.  ^_^;  Partly I’d been putting it off because I was wondering whether I should put no pictures in it to be able to leave the post open, or whether I should post pictures (which more than likely have students in them) and password protect the thing. After going the password-protected route, I decided to take out some pictures, leaving only those in which it’s impossible to make out individual students.

For those just tuning in, 体育祭 (taiikusai, literally meaning “physical education festival” but usually translated as Sports Day Festival), is something schools across Japan put on.  The English translation is deceptive as when we think of “sports” we think of matches of things like baseball, soccer, etc, but there aren’t any such sports on Sports Day.  Instead, there’s tumbling, tug-of-war, relay races, cheerleading, hitomoji (making an image/letters with each person holding up one board), girls’ dance, and ouen, which is sort of like manly, militaristic cheerleading.  (If you type 応援団 into YouTube you’ll get several results; all are a bit different from each other and different from the way it’s done at my school, but that’s the general feeling.)

This year I actually took many more pictures in lieu of taking video.  Unfortunately, this year my seat was in the fourth row, so I couldn’t get a single clear shot until the end when I went to crouch down in front of the first row. 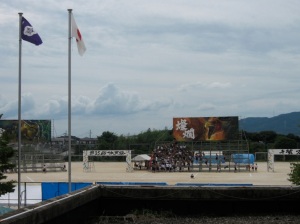 A wide shot showing the Red Team’s back board. You can also see a bit of Yellow Team’s.

I went into the school building during the lunch break to get the above shot. The Red Team backboard, obviously the one executed with the most skill, was made by the third year Art Course students. 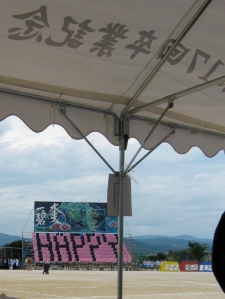 Blue Team’s back board, which I thought had been made by the second years, was actually done by the first year Art Course!

At the conclusion of this year’s events, before the awards ceremony, there was something I didn’t see last year: all three teams came together and did ouen for the school.  There was a special ouendan composed of male members of the student council; they wore purple headbands, their regular uniform pants, the special taiikusai shirts, loafers, and white gloves.  In the middle, they raised a bamboo pole that had the school flag tied to it.  There was a small stake in the ground for the bamboo pole, but it wasn’t much really considering the height of the whole thing, which must’ve been about 50 feet (15 meters), and after about 5 minutes it started to waiver.  Luckily, the boys didn’t drop it. ^o^

Also fresh this year was a co-ed relay race near the end.  At least, I don’t remember this event being there last year.

Well, there’s really not much more I can say without putting up pictures, so I’ll leave it at this.  If you want to see last year’s posts about taiikusai, here are links (one is password protected. Don’t ask me what my name is, I won’t tell you.  ^o^):