EXILE is a very popular 14-man music group: 12 dancers and 2 vocalists. Given how hugely popular they are, it always used to surprise me when students who told me they were big EXILE fans couldn’t tell me what “exile” meant. When I would tell them that it means 「追放」they always reacted with surprise. They don’t get why the band is called that either.

For me, not knowing what your favorite group’s name means is the perfect example of what happens when a language is used as commercial glitter. When ALTs say that students don’t have enough chances to listen to real English, I think, is the problem that, or the opposite? I think they have too much English floating around, both of the grammatically correct kind and the “all your base are belong to us” variety. I think English in Japan has become a part of the background noise, like the hum of electric appliances. You never notice that they are constantly making a sound until there’s a black out.

Maybe there’s also a certain level of naiveté involved, but I hesitate to reach for this conclusion because I think it’s a bit condescending. Is it paranoia that makes me think, “don’t wear clothing with text you can’t read,” “don’t repeat things whose meaning you don’t know,” or just good sense?

Today my English Club girls put on a CD. It was kind of rowdy rock music so I asked what it was. They didn’t really know, so they just pointed to its jewel case by the stereo. I go to look at it: it seemed to be a band composed of foreigners and Japanese people. On the cover it said 「女の子募集中」(“Recruiting Girls”). I flip it over to check out the track list. One: “Drink Beer.” Inappropriate, but not too bad, I thought. Two: “Whipped!” Then my eye drifts over to three. It was “Stinky P***y.”

My jaw hit the floor.

I debated with myself if I should tell them what that meant. On the one hand, I think, as girls they should be aware that there’s this language that’s not very nice to them so that they can avoid promoting it. On the other, I wondered what they would think of the fact that I knew how to say that in Japanese off the top of my head.

Ultimately I did tell them. I think they should know in general because this stuff is out there, and I don’t want them to embarrass themselves by saying bad words without knowing they’re bad words, or by saying they like certain music without knowing what that music is really about. Can you imagine a potential host family’s reaction if these girls went abroad and took a CD with such tracks as “Drink Beer” and “Stinky P***y” as an example of the music in English that they listen to? And I do hope that it’ll make them think twice about what it is they’re listening to, and sometimes buying. I want English to stop being just more background noise.

Well, the school festival was two weeks ago, but I’m just now getting around to posting this.

At my old school I didn’t really get a chance to experience the culture festival as a whole because I spent the morning of the second day judging the speech contest for junior high students that my high school hosted. In the afternoon I would see the second performance of English play, and by the time that finished the individual homerooms’ and clubs’ “exhibits” would be over.

At my current school my responsibility was to ESS, which means English Speaking Society. In other words, English Club. We decided a few months ago that we were going to have an American Festival. The plan was to have several games: darts, the touch game (手探りゲーム? Milton Bradley makes one called “Feeley Meeley” but I don’t know what you’d call this type of game in English; you put your hands in a box and try to guess what it is you’re touching without looking at it), face painting, fortune telling, and the centerpiece: piñatas! 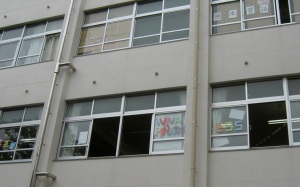 Looking up to the ESS exhibit room (which wasn’t the usual club room; the exhibits are done in the homeroom classrooms) from the inner school garden.

I explained to the ESS students that “Viva!” was sort of like “banzai!” I also tried to explain that there had been a freakishly adorable TV show called “Viva Piñata,” but I’m not sure how much of an impact that made. 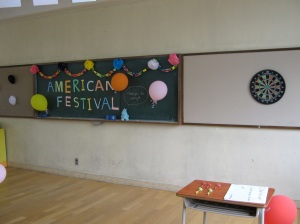 Well, the school said no to face painting (too tattoo-like?) and no to putting candy in the piñatas. No one wanted to take over the responsibility of being fake fortune tellers, so we were left with piñatas, darts, and the touch game. Piñatas are mostly associated with Mexico, and we put konnyaku in the touch game…so ultimately the only “American” part of the “American Festival” was the darts. ^_^; Sure, the U.S. being such a diverse (if segregatedly so) country lets us get away with this but…

Ah, the day of I learned to make balloon animals from the instructions on the balloon’s package. That’s pretty American Festival-ish, right? 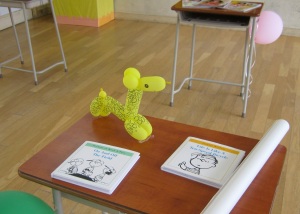 We also put out some books and magazines around the room. I pick up some mags for the ESS girls when I’m in the States. In the background there’s Seventeen, The Oprah Winfrey Magazine, and…I don’t remember what else I got for them. Something youthful, I’m sure. Ahaha…

As for the piñatas themselves, we made it so that each person only had 30 seconds “at bat.” Well, “at shinai.” We didn’t have a regular stick so we borrowed a bamboo sword from a member of the kendo club. I wish I could share the precious photos of students hitting the piñatas with those formal kendo downward strikes, but alas. 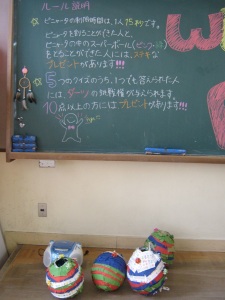 We made 5 piñatas in total. The rules written on the board explain the piñatas and the darts game.

Since we couldn’t put candy in the piñatas, we just put in different color superballs, and people who grabbed a pink or green superball could choose a small prize. We had things like tissue and folding fans with Disney characters, notebooks, mechanical pencils, and glossy bookmarks that I’d brought back with me from Spain. The rest of the prizes (as well as the materials for the rest of the exhibit) were bought with the special “school festival club budget.” 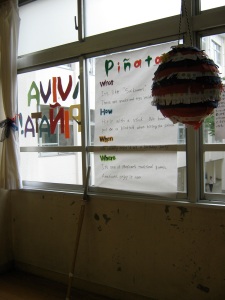 This piñata was the model for the others, decorated by yours truly. Before it was murdered by the guests, it thought stoically, “It is a good day to die.”

The first day of the festival was just the brass band concert and the chorale competition. The exhibits were opened, but in ESS’ case we didn’t actually let the guests play the games since, in the case of the piñatas, our hard work gets destroyed. The second day we had guests from the community, elementary and middle schoolers, and even a local radio station drop by and check out the zaniness, as well as the students of the school itself.

Unfortunately, despite my best efforts to reinforce the piñatas around where the string is inserted into them, all of them just ripped off the string and ended up on the floor. One pair of youngsters just stuck their hands in the hole to get the superballs, not understanding the “you can hit it until it breaks” concept. The boys of my own school, however, had a blast just beating the life outta the poor piñatas à la suikawari.

(That last sentence was quadrilingual. Nyeh!)

While all this was going on, I sometimes went out of the ESS room to check out the other exhibits and of course, the “Culture Stage” which featured live music. I made sure to check out the band of seniors that went by the name “Williams” because they had L’arc~en~ciel’s “READY STEADY GO” on their set list. I also went to see the shamisen performance of one of the first year students.

Now that bunkasai is over and finals are upon us, we have to plan the farewell party for the senior members of the club. From second semester on, the seniors “retire” from their clubs to make time for studying to get into a university. The ESS members said they wanted to have a piñata party, since they themselves didn’t actually get to play. Part of me sheds a tear whenever a piñata is put out to fulfill its cruel destiny, but ah! such is life. Again I must go to the dastardly enterprise.

In case you didn’t learn how to make piñatas while doing full time volunteer work in the AmeriCorps program City Year, here’s a video that shows you how to do it: http://video.about.com/familycrafts/How-to-Make-a-Pinata.htm

Haha, and I learned how to make balloon animals on JET! XD

It’s been a crazy week. A dark week peaking into the realm of the human psyche.

Well, I guess it was technically last week that I was asked to change some materials I had made for the lesson on dreams. My illustration for the common dream of falling depicted a stick figure falling head first from a building. I was told that there was a student who had attempted to jump to their death. So I changed it to falling out of bed. Well, don’t know if people actually dream about that, but I at least have hypnic jerks all the time.

Then on Tuesday the trains were late because of an accident. A 人身事故 (jinshin jiko, an accident where a train or train car kills or injures a person). It had been nearly a year since I was delayed by that on my way home from work. I remembered because that time I had taken a taxi because I was really tired. And it was raining. It was during the rainy season.

In comes Wednesday and things seem to be going well enough. Went to Japanese class. Everything was fine. On my way home I saw an ambulance with its lights flashing and sirens on…then I saw it again. It was going in circles. They must’ve been having a hard time finding where they needed to go. I thought, “man, that’s messed up.”

Didn’t think I’d be flagging down a similarly circling ambulance within just 2 hours. Taking an ALT to the hospital for the second time in my 3 years here. A serious sickness sometimes just pops outta nowhere. The body odd, indeed.

June seems to be a tough month.