This probably amuses me more than it should.

The final assignment before finals that I gave the students was to research any world mythology and share one story or episode from it. My plan had been to put the best speeches on display, but alas, too few students seem to understand the concept of using folders/clear files to not let papers get raggedy, and that of writing neatly. So I hit upon the idea of having them turn their speeches into illustrated mini-books. Ever since an ALT used mini-books made from a single piece of paper in their presentation at one of the ALT meetings I had been looking for a project to use these in.

I made three sample mini-books using the stories we had read in class together, namely that of Orion and the Scorpion, Echo the Nymph, and a modified version of Momotarou. I called it “Momohiro.” >o<;

When giving students writing assignments, if you don’t explicitly say “Don’t use Momotarou!” you will get several Momotarous, often with no variation on the most well-known version. I actually needed an easy story to demonstrate how to divide text into paragraphs, so I choose Momotarou since then understanding the words themselves wouldn’t get in the way of understanding how paragraphs are used to create flow. But I just can’t bring myself to tell that story as it is. I’ve heard it and read it ten trillion times. When I had to write that story in the Japanese class I go to here, I made Momotarou talk like a Sengoku era warlord. This time I figured I could at least change the details.

Of the different suffixes for boys’ names (e.g. tarou, hiko, suke, etc) I like the ring of “hiro” the best. Hence, “Momohiro.” Ahahaha…

Without further ado, here are photos of the sample book. My camera’s been acting up lately so it looks like the paper is canvas what with those lines, but it’s just a regular sheet of A3 paper. Enjoy! 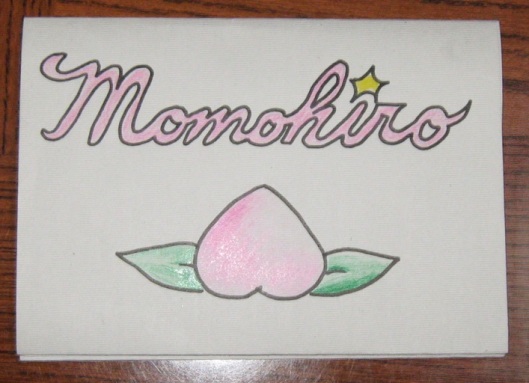 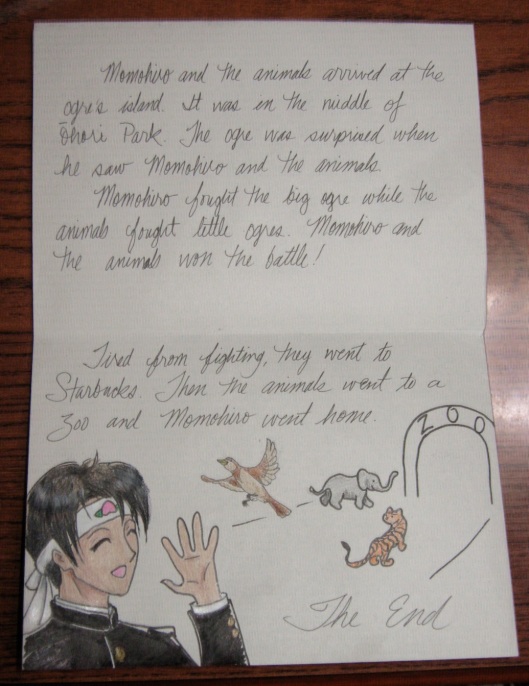