Last week I went to the Detroit Institute of Arts with some friends to see the special exhibit Samurai: Beyond the Sword. If you haven’t seen it yet, you’ve only got until June 1st to do so. (And if you’re a Wayne State student or alum, today is the last day you can get the “Warrior Wednesday” discount. It’s been extended through May.) 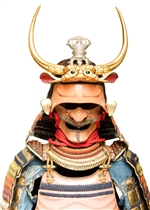 “Tousei gusoku,” (当世具足) a type of armor common in the Tokugawa Era. From the DIA’s exhibit site.

It was a pretty good exhibit. As advertised, there were not only swords and armor on display, but also painted screens, ceramics for use in tea ceremony, paintings, woodblock prints, and other types of art. That’s not to say that the swords and armor weren’t artful, as they most certainly were. There was even a case or two with just sword hilts and fittings, so you could really see the detail and craftsmanship that went into every part of the sword. Short, explanatory videos in each section of the exhibit helped bring the displayed items to life. And, according to one friend, who started off listening to the accompanying adult audio tour but ended up switching to the children’s one out of curiosity, you can pretend that you’re a samurai in training by listening to said youth audio tour as you walk through the exhibit.

The exhibit is premised on the concept of 文武両道 (bunburyoudou) meaning “literary and military arts,” or, more gracefully, “the pen and the sword.” People of the samurai class were expected to be well versed in not only martial arts, but also literature, painting, and other scholarly pursuits. The term bunburyoudou, however, is from a time before the Tokugawa Era (1600-1868) that the exhibit covers, being recorded in the Shiji nearly 2,000 years before the samurai age. The term has also survived well into the current day, being used often in schools. Indeed, when I stepped into the exhibition space and saw 文武両道 written on the wall (one of the few instances of Japanese text in the exhibit, not counting Japanese written on the displayed items themselves), I could hear the voice of the third vice principal I had worked with, as he would say it often in assemblies and staff meetings. This concept of bunburyoudou was probably in play at my first school as well, only I didn’t know it.

One of the things that always left me scratching my head was how students with failing grades were allowed to keep on participating in after-school clubs and sports. In my high school education, and in many other Americans’ high school experience, extracurricular activities in the States were seen as a privilege, not a right. If your grades fall, you get suspended from after-school activities until you get your grades back up. Granted, there seemed to be a bit of looking the other way when it came to a few members of my high school football team, but for the most part this pattern held. Students on sports teams were “scholar athletes.” Not just scholars, not just athletes, but both. In contrast, there were students at my first school in Japan who were constantly failing tests in all their classes, yet they were never pulled from their teams or clubs.

I mentioned this once to the owner of a restaurant I used to frequent. I explained the American system, and he answered, “But then don’t the students get upset, not being able to participate in their clubs?” I answered that some students did, but that at the same time, they knew from the beginning that keeping their grades up was a condition of their participation. He went on to say that the thinking in Japan was that if someone isn’t good at academics, if you took sports away from them, they’d have nothing, and that would do them more harm than good. I could see where he was coming from, but I wasn’t quite convinced. After all, students can end up spending 3 and a half hours after school in clubs. Would it really kill them to take half of that time for study?

It wasn’t until I was transferred to my second school that I started hearing the term bunburyoudou with some frequency. I heard the vice principal say it the most during a staff meeting at the beginning of my last academic year in Japan. He was comparing our school to a private school he’d visited recently. The students there usually got into some of the best universities in the country. But there was no “school life” in the sense that there was apparently very little student participation in clubs. This made him realize, he said, just how wonderful a bunburyoudou school is. Such a school teaches young people how to live, not just how to take tests.

I remember thinking, 「どうかな？」(“Is that so?”) Ahaha…of course, my cynical reaction was based on what I saw of Japanese education, which was mostly English education, which, last I saw it, was still almost entirely at the mercy of the university entrance exam. Also, I couldn’t help but think that it isn’t truly bunburyoudou, the pen and the sword, if either side is allowed to remain at a level of undeniable incompetence. It was more like “the pen or the sword” for many students. That was my impression anyway.

Then again, perhaps it was like that for some people of the samurai class as well. There was one quote that really stood out to me at the DIA’s exhibit. It wasn’t something Musashi or Yagyu Jubei or some other celebrated samurai said. It was a quote from Tsubaki Chinzan, a samurai whose stipend was too small to live on, forcing him to take up painting to create a second source of income for himself. I don’t remember the exact words now, only the gist of it. Chinzan lamented the fact that he had no choice but to spend all his time painting pictures for others, people with the time and means to read classic poetry and commission artwork based on it, and otherwise lead culturally enriching lives. In his financial situation, apparently Chinzan didn’t have much variety to the arts he could spend time on.

All that said, I think balance is a good thing to aim for. In that sense, I like the philosophy of bunburyoudou.

2 thoughts on “Of Samurai and Scholar Athletes”