All new JETs go to Tokyo Orientation, where we learn more about the program, our jobs, the Japanese educational system, etc.  It was held at the swanky Keio Plaza Hotel.  They say many JETs skip out on the workshops to wander around Tokyo, but I went to all of them.  There was one I really wanted to skip because I knew it wouldn’t tell me anything new, but, ultimately I went anyway.  So, my only chance to go to the one place in Tokyo I really wanted to go to was on arrival day, Sunday the 2nd.

It’ll probably sound silly, but the one place I absolutely had to go to was the Square-Enix Show Case.  I won’t talk much about it here, since this blog is supposed to be about JET not geeking out, so, yeah.  But I was really happy I got to go!

At the hotel I had two roommates who also had flown out of Detroit.  There was one ethernet connection in the room that we took turns using.  AJET (an organization that supports JETs, to keep it simple) had set up a room with computers and gave everyone a free 5-minute Skype call.  I was also able to change the last of the American cash I had at the hotel.  (Side note: I had changed most of my money to yen in the States.  When I first heard that one should take yen, I was worried about where to get it, but it was really easy at Chase.  You just request it, give the money to be exchanged, and it comes within one to two days!)

Every prefecture had a special night out event.  Fukuoka’s was on the second night, on Tuesday.  We went to Torigen, a restaurant specializing in chicken.  It was a 食べ放題 飲み放題 (tabehoudai + nomihoudai), meaning “all you can eat & drink.”  Most of the food was great, but it was expensive (4600￥, or about $45 per person)!  One of the JETs made friends with some of the other customers in the restaurant, and since they were a bit drunk they were really funny and crazy.  One of them introduced himself in English as “Samurai.”  When he left, he waved and said “Japanese Bye-Bye!!!” (Not to imply none of the JETs were buzzed because, well, some were.)

During the dinner, I learned that one of my fellow Fukuoka JETs was also a Square-Enix fan.  We decided to go to the store, even though it would be closed.  I offered to lead the way since I knew how to get there from the hotel.  But, there were some… circumstances and we didn’t leave directly from the intersection I knew so…we ended up walking in circles! >_<  It wasn’t too bad though; at least I got to see more of Shinjuku, which I would not have seen otherwise.  On the way we stopped to get “bubble tea,” which is tea with tapioca (the “bubbles” I guess) in it.  I think it took us an hour to find the store, even though it should’ve only taken 15 minutes!

The SE Store is on Koshu kaido, but we were a ways off at this point 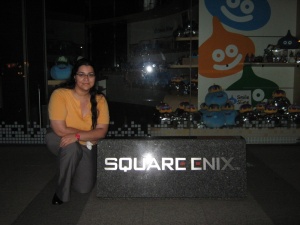 Being a total geek

The next day, everyone went off to their respective prefectures.  People close to Tokyo just took trains, but since Fukuoka’s far away on Kyuushuu we flew out of Haneda Airport to Fukuoka.  Everyone was greeted at the airport by someone from their Contracting Organization.  I was greeted by one of the Vice Principals, my supervisor, and my predecessor.  They were all very nice.  Both of the gentlemen from the school speak English well, so that made things easy.  The four of us had lunch at a Japanese restaurant in the airport.

Then, we went to the immigration office since it’s right there in the airport and I got a re-entry permit.  My predecessor commented that most people don’t know you can do that (get the re-entry permit right when you first arrive), and that it should be more widely announced.  Indeed it should be!  While I’ve had difficulty getting other things set up, at least I know that should I need to travel outside of Japan I already have the re-entry permit.

Whoops, this is no longer about Tokyo!  Stay tuned for the next post: “First Days in Dazaifu.”