They say TV and video games don’t teach you anything, but I wouldn’t know the word 絶望 (“despair”) if it weren’t for Advent Children!  Okay, AC is a movie, but it’s based on a game!

…and I probably only remember it because Sephiroth says it. ^_^;

Anyway, on October 14, the first years went mountaing climbing, and since us ALTs pretty much only work with the first years, we went with them.  Normally, the students climb nearby Houmanzan (宝満山), but since there had been avalanches on Houmanzan, we climbed Shioujiyama (四王寺山) instead, a mountain half as high as Houmanzan. I made it alright, but I don’t think I would’ve been able to climb and descend Houmanzan without serious pain.

Along the way, the students (okay, mostly just the girls…) kept exclaiming キツい！ and 無理！  (meaning “this is hard!” and “It’s pointless [for me to go on]!) But at one point, the girl behind me said 「絶望登り」(“climb of despair”), and I thought maybe that really was that part of the trail’s name.  If I understood her correctly, it’s not; she just called it that because she thought it was that difficult.  Wonder what they would’ve said if we had climbed Houmanzan!

Here’s a view from the top I stitched together from 3 photos.  The relatively large, bluish rectangle visible at left just over the verdure is the Kyuushuu National Museum.  Yeah, I said “verdure.” ;P

At the bottom, we walked over to nearby Dazaifu Tenmangu Shrine, which I talked about in this earlier post. But the first time I went there, I didn’t get to see the Dazaifu Ruins.  Dazaifu was the center of government of ancient Kyuushuu. The Ruins are just the feet of columns in the ground, so visually it’s not terribly interesting.  But, there are some interesting stelae. We sat down to eat lunch on the field by the ruins, and the students who had been complaining about how hard the climb was were now running about horseplaying.  The energy of youth, eh? 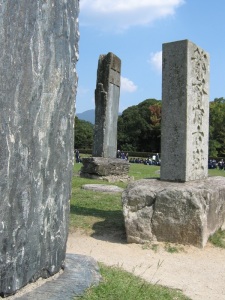 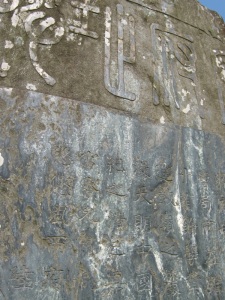