I stand at just 5’6″ (167 cm) so I never thought of myself as having long legs. But it’s something I get told here in Japan, not for being tall, but because my legs are long relative to my torso. Many Japanese have a longer torso relative to their legs. Now, when I first started paying attention to this ratio after being told that I had long legs, I thought, how funny, considering one of the few things that nearly all anime have in common is that the characters have ludicrously lengthy limbs on par with the 9.5 heads high human figures of fashion illustration. Of course, anime and manga are not real life, so I can put it down fantasy. But I was a bit surprised by the nearly universal reaction to this illustration:

I drew this for a lesson on shopping. I didn't have enough time to fix the skewed perspective caused by drawing on a flat surface.

I thought, “Is it really that different from what you see in anime? Isn’t that normal for this type of drawing?” @_@ Out loud, however, I just laughed and said, “It’s a habit I developed because I first learned how to draw humans from a fashion illustration book.” (Which is true, BTW.)

After the fashion illustration book, the biggest influence on my drawing style was Sailor Moon. There go them long legs again! 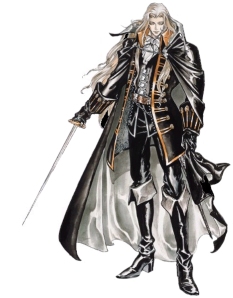 After Sailor Moon, Ayami Kojima's illustrations in Castlevania: Symphony of the Night made me consider seriously studying art.

Our half-vampire half-human friend there stands about 8.25 heads high in this illustration (counting to his heel, not the heel of his boots–which I’ve always wanted a pair of! >o<;), still with longer legs relative to his torso than the average person has in real life, Western or otherwise.

Well, I will say that, especially on the girl in my illustration, the legs are not so much “too long” as they are “too big.” Drawing the lower half of the body too large is a tendency I have that is exacerbated by lack of a proper slanted drawing surface, and lack of time to fix the mistake when I see it.