Thursday, December 31st, we woke up too late to have the hotel’s 1000 yen breakfast.  I’d been wanting some fried rice, so we walked in the general direction of the Tokyo Metropolitan Museum of Photography and ate at the first Chinese restaurant we found.  Now, while I’m pretty sure “chaahan” (チャーハン） equates to “fried rice,” none of the chaahan I’ve had in Japan so far is quite like the fried rice I’ve had in the States. I wish I could say chaahan in tastier, but most of it is not.  So, at this Chinese restaurant, I looked at the menu and saw a chaahan that looked like the fried rice in the States.  Without noticing the 「辛」 written above the picture, I ordered the big serving.

辛 stands for “spicy” (as in, 辛い “karai”).  It didn’t go well. It’s not that it was terribly hot, but after a lot of even a mildly spicy food, the spice accumulates in your mouth and gets hotter.  I couldn’t finish it, and it wasn’t that good to begin with.  *sigh* So we finished up, left, and once again headed for the museum – stopping at a conbini on the way to pick up dairy products to fight the spice.  As we walked, we saw a sign for a silver accessory shop with a very interesting name, and decided to check it out after the museum.

Well, we really should’ve known, it being New Year’s Eve, but the museum was closed.  *wump wump wummmp*  All I could do was take a picture of the Museum of Photography. 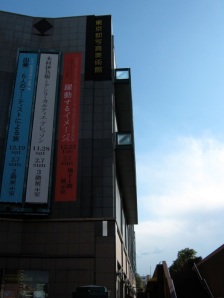 Because nothing can break my sense of irony.

After that, we headed back to the silver accessory shop’s sign.  We followed two more signs into a small alley.  (The suspense is building, no? ^o^) Finally, we came to it: Big Black Maria.

This ring is called SATORI, meaning "Englightenment." This picture is from Big Black Maria's site, linked to above. They say they ship overseas. : )

While there wasn’t a big, black Maria, there were many pictures, paintings, and statuettes of the Virgin Mary, along with plenty of Mexican-style skulls (such as the sugar skulls for Dia de los Muertos), some Buddhas, and other random things that metalsmiths who were probably hippies would amass.  And of course, the main attraction: awesome silver accessories.  When I saw the price tags, I was thinking of getting outta there, but the guy started straightening up the place (it was a bit messy; but hey, they’re artists!) so I started to feel bad about not buying anything after he’d gone through the trouble. And, there was a really cool ring I actually wanted, 禅ヒッピーリングSATORI, (“Zen Hippy Ring SATORI,” LOL)  pictured above. The price: over 19,000 yen (about 200USD)!

Luckily, there was a similar ring, 禅ヒッピーリング道  (“Zen Hippy Ring Michi,” michi meaning “road” but in this case it probably means “the way” as in the teachings of Buddha), which cost 13,000 yen (about 140USD).  SATORI is basically two Michi rings put together. While I like single-knuckle armor rings, SATORI’s price was a bit much, so I went with Michi and vowed not to buy myself anything else for the rest of the trip.  We waited about 20 minutes while the shopkeeper/metalsmith/artist sized the ring for me.

After that, we went back to the area of the museum to look around.  The area was Ebisu.  There was beautiful weather, it was a pretty open area, and there were barely any people around, so it wasn’t the usual atmosphere one imagines for Tokyo.  We took in the air, walked the length of the skywalk between two stations (I can’t remember which ones) on its moving walkways, and decided to head for Ginza, to the Sony Building and the nearby Tsukiji Fish Market.

In the Sony Building we saw all sorts of cool gadgets, some more useful than others.  Among the useless ones was Rolly, a cylindrical music player that “dances” in time to your music by rolling around. Cute, but the novelty wears off pretty quickly. The most useful ones were cameras with auto-stabilization.  That is to say, no matter how unsteady your hand, the video captured would remain steady. The main attraction, however, was the HD 3D technology.  It was unbelievable! Well, I haven’t seen the latest 3D in the States.  I’m comparing this to crappy “3D” where you put on those paper glasses with one red lens and one blue lens.

After that, we headed towards the Tsukiji Fish Market.  On the way, we spotted the Kabukiza, the main kabuki theater of Tokyo.

There wasn’t much going on at the fish market by the time we got there.  It’s a bunch of stalls with seafood.  But as we left, we saw the side of a strange building and went to check it out.  Turned out to be Tsukiji Hongwanji.  According to its Wikipedia article, the current building was built in the 1930s, which helps explain the strange architecture (for a temple).  The article refers to a “memorial” in the temple’s main hall to X Japan’s guitarist Hide, but…well, I guess you can call a table in a dark corner with notebooks and photos a memorial.

The banners on the temple say, 心の安らぎのために本堂へお参り下さい, "Come to the temple for peace of mind." (Loosely translated.) 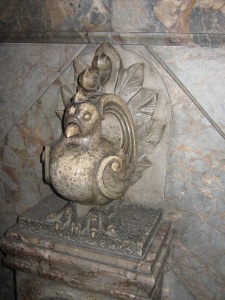 Next, we went to Roppongi.  Now, the previous two days we’d gone out with coats on and been too hot, so on this day we had decided to go out with just sweaters.  It was fine in the daytime, but by evening it had gotten chilly. When we got off the subway in Roppongi, it was windy and the sun had set.  Shivering, we saw “Maman,” a huge sculpture of a stylized spider, and had a nice view of Tokyo Tower just past dusk.  We both struggled to get a good shot, but could only withstand the cold for so long.  Without a tripod, this is as good a photo as I could get: 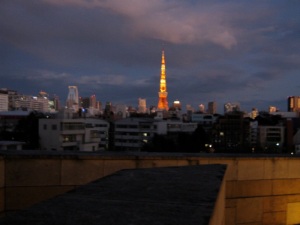 Having at least gotten this much, we ran into the nearest building not caring for what it was.  Turned out we were in the Mori Arts Center within Roppongi Hills Mori Tower.  They had a special exhibit going on that seemed cool, about art and medicine, but tickets were nearly $50, so we didn’t go.  Instead, we went to the museum gift shop.  They had really cool stuff, such as purses made of zippers.  Just zippers!  So, you could custom build your own purse to whatever size and color(s) you wanted by buying the purse bottom, top, and then how many ever zippers you needed to make the body.  There was also a shirt with blinds drawn on and a string attached to where the string would be on actual blinds, and if you pulled the string the shirt would roll up like blinds! I picked up some post cards and cookies to be omiyage for the teachers. Done shopping, we decided to go back to the hotel to get our coats and drop off our swag.

Once bundled up, we set off for dinner.  We ate at an Asian fusion restaurant not far from Akihabara station.  The food was great!  They had chaahan that actually tasted delicious!  Still not like fried rice in the States, but it was very tasty.  Since it was our last meal of 2009, we made sure to get desserts.  I had cheesecake. ^_^

By the time we finished eating, it was about 10PM.  We made our way to what we thought was “Asakusa Temple,” the famous temple with the red gate and huge red lantern in Asakusa.  In the station we asked how to get to Asakusa and followed the instructions we were given.  But once we arrived, there were signs everywhere pointing to “Sensouji” (the signs said “Sensouji” in romaji).  We were a bit confused, but then noticed that “Sensouji” was written with the same kanji as “Asakusa Temple” (浅草寺).  We followed the signs, and indeed, Sensouji was the famous temple with the large red gate. (Once I got home I looked it up in Wikipedia, and it turns out that Asakusa Shrine is next to Sensouji; the shrine being a Shinto shrine, while Sensouji is a Buddhist temple.)

We actually hadn’t walked in from the main gate, so we walked down the path with all the stalls selling omiyage, amazake (sweet sake) and some kind of deep-fried mochi (rice cake), then came to the main gate.  We took the obligatory pictures with it. As Cassie took mine, there happened to be this young guy next to me doing 決めポース (“kime poosu,” meaning “set pose”), and his friends were yelling at him not to do that. When I see this guy, I feel as if a victory fanfare should be playing. ^o^

Then, we walked back toward the main hall.  This was at around 11PM.  It was crowded, but since people were still looking at the stalls, half of the approach to the temple was still clear, so we were able to go almost to the very front of the crowd.  Why they were only lining up on one side, I don’t know.  I was worried that we’d cut in front of hundreds of people, but neither they nor the many policemen we walked past said anything to us.

Approach to the temple

Hm, I just realized I haven’t explained what’s so important about going to a temple on New Year’s. ^_^;

On New Year’s, and the days following that, it’s customary to go to a shrine (or temple) to do 初詣 (“hatsumoude”) meaning the first visit to a shrine of the new year.  You pray for a good new year, or whatever you feel you need to.  You should have a five-yen coin (or two, or three, or…a fistful) at the ready for when you enter the shrine, as “five yen” in Japanese is “go en,” which also sounds like “relationships,” so you throw the five yen coin(s) into a special area for them to hope for good relationships.

Anyway, we went up near the front of the crowd, close to the entrance to the temple’s main hall.  A few people were allowed in before the stroke of midnight; I don’t know if they were special people, or people who didn’t care about not going in during the New Year proper.  As it got closer to midnight, the crowed slowly pushed forward.  By then the aisle was completely packed.  The police officers keeping the crowd in check held up their 「しばらくお待ちください」(“please wait a little longer”)  signs with a little more fervor.  Cassie and I started doing a countdown at 10 seconds to midnight, and this Japanese guy next to us joined in. ^o^  Once it officially became the New Year, it was no-holds-barred!